Dandelion Greens are one of the most highly recommended vegetables. They are very fun to gather in the fresh air of spring. They grow best in flowerbeds where the taproots can grow deep and produce bigger leaves. Here I will discuss dandelion root benefits and dandelion greens health benefits of which there are many!

Can you guess which plant family dandelions belong to? The Sunflower is the largest plant family and includes 22,000 species, including daises and thistles. Middle Eastern physicians used dandelions as a medicine in the 10 and 11th century. They were also used in Welsh medicines in the 13th century, booth dandelion roots and dandelion leaves. Dandelion extracts have long been used by traditional Chinese medicine and native American medicine to treat liver disorders and digestive diseases.

A 2013 study suggested that dandelion root benefits may include anti-rheumatic effects. These findings indicated that the use of herbal preparations of dandelion root, “containing a high level of KYNA can be considered as a supplementary measure in rheumatoid arthritis therapy, as well as in rheumatic diseases prevention.” That is great for me to know since my grandma got rheumatoid arthritis in her 30s.

And stop the presses for this one folks, it seems huge to me. A 2012 study showed the dandelion root benefits to include usefulness in the treatment of human pancreatic cancer cells! They concluded, “Dandelion root extract (DRE) has the potential to induce apoptosis and autophagy in human pancreatic cancer cells with no significant effect on noncancerous cells. This will provide a basis on which further research in cancer treatment through DRE can be executed.” Wow. Along those same lines, dandelion root extract was shown to cause efficient induction of extrinsic cell death in human chronic myelomonocytic leukemia (CMML) cells. And that study concluded that Dandelion Root Extract has “great potential as non-toxic and effective alternatives to conventional modes of chemotherapy available today.”

Herbalists suggest that dandelion root benefits include detoxifying and strengthening the liver and gallbladder. Studies such as this 2010 research support these dandelion root benefits suggesting that it may be useful in treating liver fibrosis by the inactivation of hepatic stellate cells and the enhancement of hepatic regenerative capabilities. They conclude, “present results provide scientific evidence to substantiate the traditional use of Taraxacum officinale root in hepatic disorders.” (Taraxacum officinale root is dandelion root in layman’s terms.)

I think that dandelion root benefits seem to be quite diverse and very impressive! Keep in mind, however, that the dandelion root extract that was used in most of those studies is more potent than just a dandelion root. 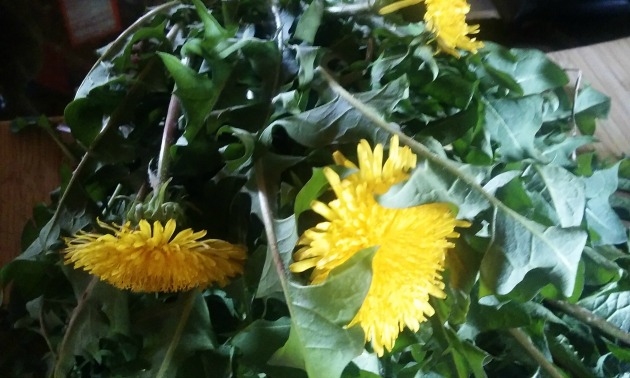 It is desirable to pick dandelion greens early in spring, before buds appear on the plants but if you miss this window of time they still may be used if the leaves are still youngish. You can soak them in salt water, as the French do. When harvesting if you cut off all the dandelion’s leaves, stems, buds, and flowers at the soil level the plant will re-grow and be almost as good as early spring leaves. In the fall you may pull up a few plants by the roots, pot them, cut back all the leaves and bring the pot indoors before the first hard frost. In this way you will have a continual supply of dandelion leaves to add to salad, sandwiches, soups, stews and casseroles. Some advocate blanching them by immersing them in boiling water for 20-30 seconds to reduce the bitter taste before adding them to recipes. You may like to read this article on how to cook dandelions.

Dandelion Greens Health Benefits include that they contain compounds that assist the flow of bile and stimulate healthy liver function. In addition, the greens have diuretic compounds that cleanse the body of excess sugar and fat. Along with the high levels of fiber that balance the metabolism and stabilize body weight.

Herbalists use dandelion leaves to support kidney function. The bitter sesquiterpene lactones compounds give dandelion greens health benefits for the kidneys because of their diuretic effects that are important in cleansing the kidney as it increases urination aiding in eliminating toxins.

If dandelion greens health benefits stopped here it would be nothing short of a panacea for the ills of modern life, however, the list doesn’t end. It’s high levels of potassium and fiber work together to lower BP levels. In addition, because the greens are rich in calcium and vitamin C, and provide 535 percent of the recommended daily value of vitamin K they are among the most important plants to strengthen bones.

In summary, Dandelion Root Benefits and Dandelion Greens Health Benefits include anti-inflammatory properties, diuretic properties, and liver cleansing actions. Because the dandelion is high in potassium and antioxidant it is beneficial in the prevention of cancer and promoting healthy blood pressure. Because it contains copious amounts of Vitamin C, Vitamin K and Calcium it is an excellent antidote for osteoporosis. The little dandelion is one of God’s great treasure stores for the healing of modern ills.

You may also enjoy this Dandelion Poem and this Grape, Violet, Dandelion Salad Recipe.