Erika Wassall, the Jersey Farm Scribe here, with a homemade brown sugar cinnamon oatmeal recipe you are going to love. Talk about a money saver!  You know those oatmeal mix packets we all buy, they’re pricey. Plus, the ingredient list and sodium content makes us flinch. That is why I decided to make my own homemade instant oatmeal mix for busy mornings! This is the perfect breakfast for kids and it is also one of my own personal favorites.

First of all, I’d like to mention the perks of making your own brown sugar cinnamon oatmeal.  The biggest, for me, is price.  It saves you so much money to make your own oatmeal mix!

A close second benefit for me is I control the quantity of oatmeal that I fix and it isn’t dictated by how many packets I feel like making. I like that I don’t have to use the same amount every time.  I prefer keeping a large tupperware container full of this oatmeal mix and scooping out what I need based on who I am fixing it for and how hungry they are. If you prefer though, you can scoop it into already measured out baggies so you can just dump them in a bowl and go.

A third benefit is that it is easy to customize this brown sugar cinnamon oatmeal recipe to make it just the way you like it. Try it the way I suggest, then modify it easily to suit your taste by adding a little more or less cinnamon or sugar. Or, if you should happen to put in a bit too much water while you are making it… no problem!  Just toss in a pinch more of the mix and even it out!

This brown sugar oatmeal recipe makes a little over 6 cups of instant oatmeal mix.  That would be about 12 of the little packets if you like the 1/2 cup serving size. With just a few simple ingredients you can make your own instant packs!

You need 5 and ½ cups of oats total. Quick Oats will work best. Rolled oats, also called old-fashioned oats will not cook as quickly. While the health benefits of whole grains are higher, steel cut oats take much longer to cook.

Take 2 cups of quick cooking oats and throw them in a blender to basically make a quick oat flour.  I used my Ninja Bullet, but no worries, a regular blender will work.  Aim for larger than normal flour but don’t worry about exactly how fine they get.  They’ll still do the job of giving your texture a more creamy oatmeal taste.

Toss those two cups and the rest of the oats into a bowl.

Add brown sugar.  I do like it a bit sweet.  But I didn’t want the mix itself to be too sweet.  So I ended up liking one cup in the mix.  I often add a teaspoon of regular white sugar when I make my bowl.  (You can always add more later but you can’t take it out!)

Throw everything else in there, salt, powdered milk and cinnamon.

Mix it all up.

It’s that easy.  At this point, you can put your brown sugar oatmeal mix in plastic baggies (about a half cup in each) or put it all in a large sealed container or gallon Ziploc bag.  If using one large container, be sure to give a good stir or shake before use. 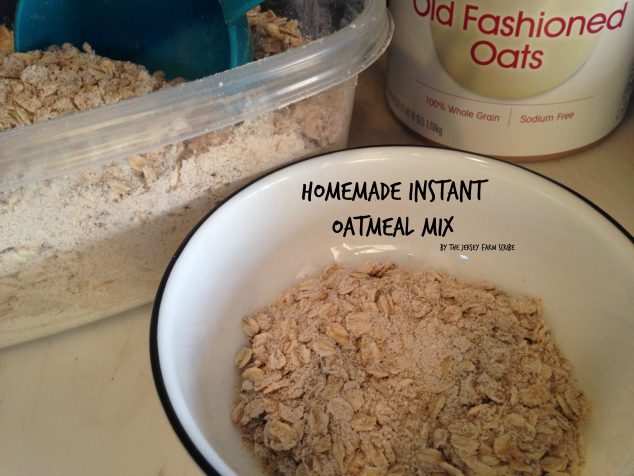 To serve:  one packet at the store is about ½ cup of the mixture.  Place in bowl, add optional toppings like chopped apples.  Boil water and pour desired amount over mix in a 2:1 ratio. For example, 1 cup boiled water to 1/2 cup mix.

Tip: If you like your oatmeal thick like I do, I use a bit less water. So I pour until it’s JUST starting to cover the oats, then stir and let sit. You can always add more if needed!

Tip:  Try toping your instant oatmeal with Craisins and chopped apples.  Perfect for the fall!

In fact, this homemade instant oatmeal mix can be used to do some pretty creative recipes online like this excellent fruit crumble topping from The Kitchn.

It is so nice to have a few easy breakfast recipes up your sleeve. I bet this homemade brown sugar oatmeal becomes a family favorite. I’d love to hear your ideas for variations!  What do think will be your favorite toppings for this brown sugar cinnamon oatmeal recipe? Or will you enjoy it most plain?