The end of the school year is upon us. Summer vacation means spending the extra-long days outdoors, soaking in every last ray of sunshine. While summer is a great time for kids to be active, whether swimming, riding bikes, camping or exploring, it’s also the perfect time to set up the hammock and relax in the shade with a great book and discover new summer reading books kids will love!

Studies show that when kids continue to read over the summer after school ends, they are well prepared going into the new school year, having sustained their reading skills. Public libraries offer summer reading programs to help kids get excited about reading, and librarians often hand out lists of recommended titles for kids of all reading levels. As a children’s librarian myself, I’ve gathered together a list for middle grade readers of fun books to keep kids reading all summer long! These books are recommended for kids ages 8-12. Happy reading! (All book descriptions are from goodreads.com).  You may also enjoy reading books as a family in addition to letting them read books on their own.

One Crazy Summer by Rita Williams-Garcia

In the summer of 1968, after travelling from Brooklyn to Oakland, California, to spend a month with the mother they barely know, eleven-year-old Delphine and her two younger sisters arrive to a cold welcome as they discover that their mother, a dedicated poet and printer, is resentful of the intrusion of their visit and wants them to attend a nearby Black Panther summer camp. In a humorous and breakout book by Williams-Garcia, the Penderwicks meet the Black Panthers.

A Snicker of Magic by Natalie Lloyd

Midnight Gulch used to be a magical place, a town where people could sing up thunderstorms and dance up sunflowers. But that was long ago, before a curse drove the magic away. Twelve-year-old Felicity knows all about things like that; her nomadic mother is cursed with a wandering heart. 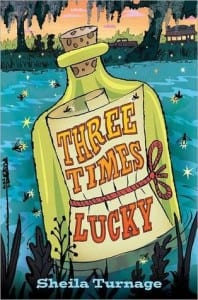 A hilarious Southern debut with the kind of characters you meet once in a lifetime. Rising sixth grader Miss Moses LoBeau lives in the small town of Tupelo Landing, NC, where everyone’s business is fair game and no secret is sacred. She washed ashore in a hurricane eleven years ago, and she’s been making waves ever since. Although Mo hopes someday to find her “upstream mother,” she’s found a home with the Colonel–a café owner with a forgotten past of his own–and Miss Lana, the fabulous café hostess. She will protect those she loves with every bit of her strong will and tough attitude. So when a lawman comes to town asking about a murder, Mo and her best friend, Dale Earnhardt Johnson III, set out to uncover the truth in hopes of saving the only family Mo has ever known.

The Surprise Attack of Jabba the Puppett by Tom Angleberger

Origami Yoda has used his Jedi-wise advice to help the kids at McQuarrie Middle School conquer all sorts of enemies, from dull school dances to embarrassing water stains. But this semester, Dwight, Tommy, Sara, and the gang must face their deadliest enemy yet: the FunTime Education System.

The Night Gardener by Jonathan Auxier

The Night Gardener follows two abandoned Irish siblings who travel to work as servants at a creepy, crumbling English manor house. But the house and its family are not quite what they seem. Soon the children are confronted by a mysterious spectre and an ancient curse that threatens their very lives. With Auxier’s exquisite command of language, The Night Gardener is a mesmerizing read and a classic in the making.

The Invention of Hugo Cabret by Brian Selznick

Half sketches create a story in pictures too, relevant history. Real last-century French pioneer filmmaker Georges Méliès collected mechanical robot-like automata, and, impoverished, worked at a toy booth in a Paris railway station. Here, orphan Hugo fixes his late father’s automata, and meets Méliès through his god-daughter Isabelle.
And last but not least on our list of Summer Reading Books Kids will love…

The Jupiter Chronicles: The Secret of the Great Red Spot by Leonardo Ramirez

A war has been fought and lost by the Jovians. Now the answer to their freedom lies within the Great Red Spot and it’s up to Ian and Callie to uncover its secret. It is the year 1892 and Ian and Callie Castillo have had to suffer the hardships of a single parent family since their father went missing five years ago. Since then Ian has refused to use the last gift that his father left the wounded boy; a telescope that sits collecting dust in the attic. When Callie decides to peer through its murky lens it activates the device and sends the Castillo’s to the steam-powered floating cities of Jupiter to rescue their father and free the Jovians before the Martians launch their final attack. What follows is the beginning of an era that will forever be known by its strange name…Steampunk. The Jupiter Chronicles science fiction series takes flight with the first book in the series….The Secret of the Great Red Spot.

All of these summer reading books kids will love can be found at your local library, book seller, or amazon (affiliate link below for your convenience).

Do you do your kids do summer reading?  What Summer Reading Books for kids would you suggest?