You are here: Home / Family Travel Tips / Top Things To Do In Macau / Macao
6 shares

I recently visited Macau (also spelled Macao) and I can tell you I had a wonderful time. There is so much to see and do in Macao! You can fly into Macao or you can take a high speed ferry from Hong Kong but a day trip really is not enough time to explore all of Macao. I was there for four days as part of a press trip hosted by the Sheraton Macao and I could have used a few more days because it is hard to fit in everything you’d like to see and do and eat in Macao!

First, let me tell you some basic information on Macau. It a Special Administrative Regions of the People’s Republic of China and it is located on a peninsula across the Pearl River Delta from Hong Kong. It was a Portuguese colony until 1999 so it is quite unique in its mix of Portuguese and Chinese architecture, food, and people.  I think Macau makes a great accessible destination in Asia because I know many people are afraid to venture to a country so unfamiliar as China and not only does Macau have a European feel mixed in, there are also many people that speak English.

Macau has been undergoing a major growth spurt and in Cotai Central (the area between Coloane and Taipa) you can still see much construction of huge new entertainment venues and hotels. The historic centre of Macau is a UNESCO world heritage destination and it is evidence of the East and West coming together based around international trade for the earliest and longest-lasting relationship between China and the West. Besides this rich cultural element, Macau also offers world-class shopping, huge entertainment venues with live shows, golf, and casinos.  Lonely Planet named Macau as one of the “Top 10” regions to visit in 2015.

9 Fun Things To Do In Macau 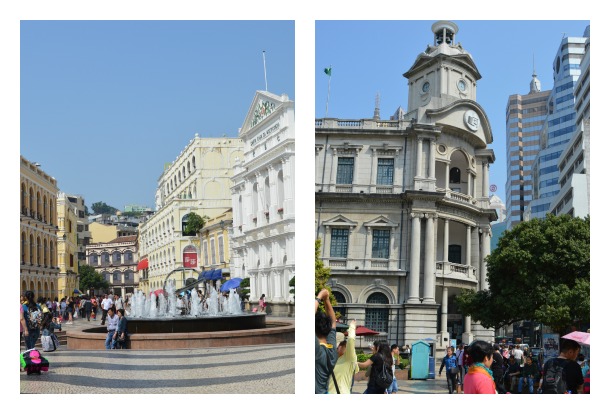 There are plenty of fun family things to do in Macau.  I would say an absolute must is a tour of the historic centre of Macau, a UNESCO World Heritage site. Our tour guide took us to see the Ruins of St. Paul Church, Camoes Garden, Protestant Chapel, Mount Fortress, Lou Kau Mansion, St. Domingos Church, Santa Casa da Misrecordia, Sam Kai Vui Kun Temple, and Leal Senado. You can see more details on these places and photos at the link above.

2.  Live Shows Such As The City of Dreams “House of Dancing Water” 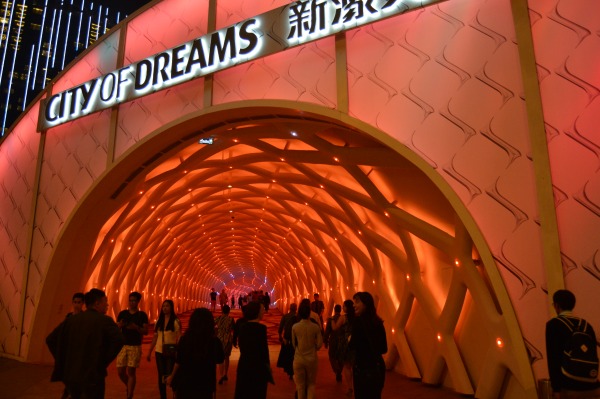 I just love the name of this event! I mean,The City of Dreams “House of Dancing Water”, is pretty cool, right!?

This is the world’s largest water show. It is housed in a purpose-built theater with a stage pool that holds a record-breaking 3.7 million gallons of water (equivalent to 5 Olympic-sized swimming pools). As the backdrop to an epic love story, you will watch the floor appear and disappear, amazing sets will show up out of nowhere, all kinds of amazing special effects, dazzling costumes, dance, swimming, diving, and motorbikes! It is quite a spectacle to behold.  This is a definite on the list of fun things to do in Macau with kids! 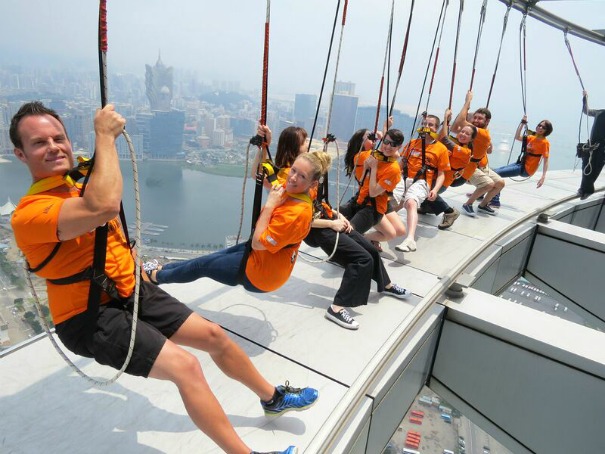 The Macao Sky needle is an impressive part of the Macao skyline.  Whether you decide to get a ticket to the observation tower, do the skywalk, do the tower climb, or bungee jump (the highest commercial bungee jump available at 744 ft – 233 meters), you are sure to have a a memorable experience. 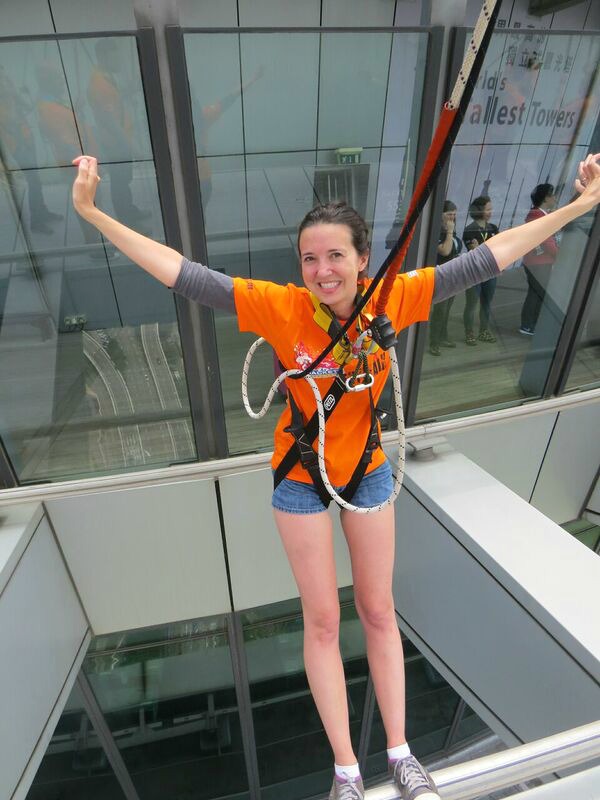 I did the skywalk.  Though I felt nauseous at the thought of it, I found it totally exhilarating and fun when I was out there sitting on the edge of the drop off.  You are, after all, safely strapped in and secured. 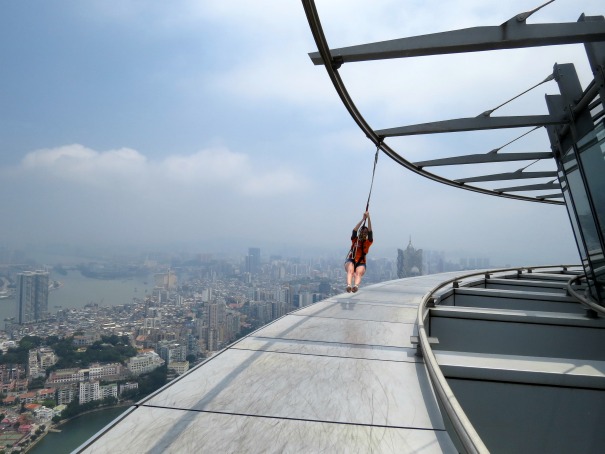 You get to run and slide along a track while you look over the whole city of Macao for the perfect birds eye view.  It is thrilling and makes for a great picture and keepsake! 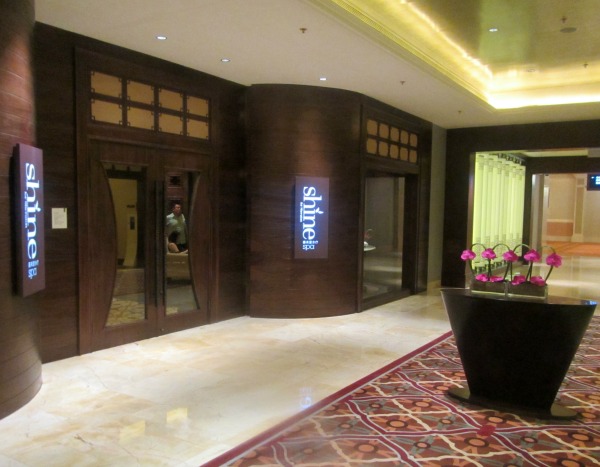 While in the lap of luxury, what better than to treat yourself to a little extra pampering and experience an Eastern spa treatment.  Choose from a plethora of relaxing, rejuvenating spa treatments at the largest Shine Spa in Eastern Asia.  You won’t believe how posh the treatment rooms and they have their own changing area and shower.   I chose the fire element massage and it was so relaxing and enjoyable. 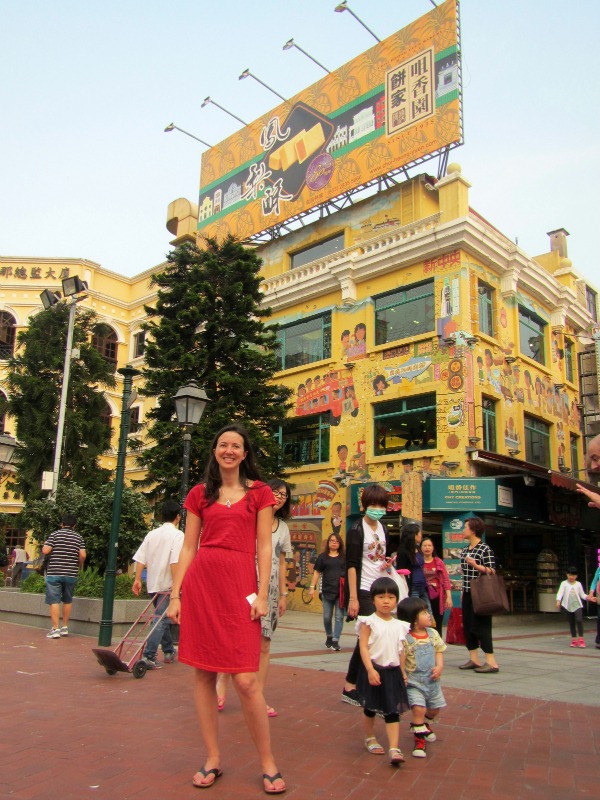 We took a stroll around Taipa and they had beautiful gardens to walk through, a few temples, and lots of local shopping. 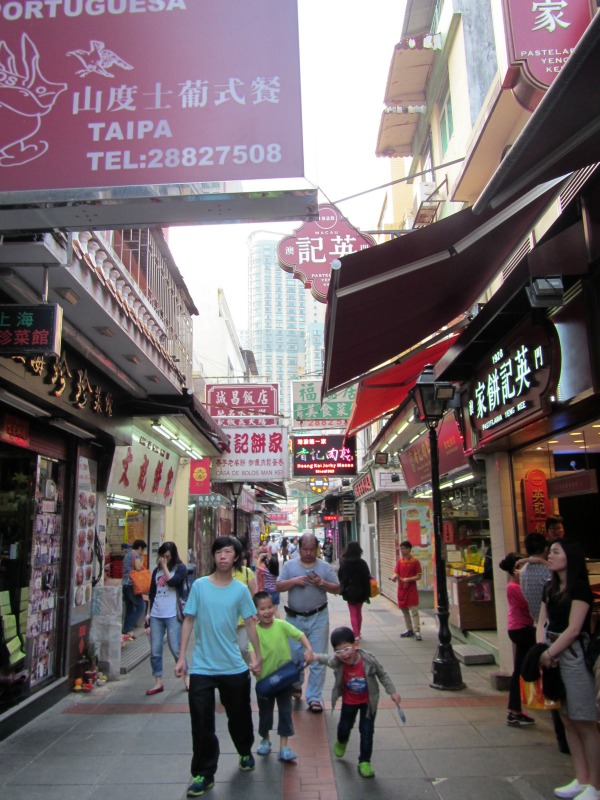 Here is a view of the Cotai Strip from Taipa gardens. 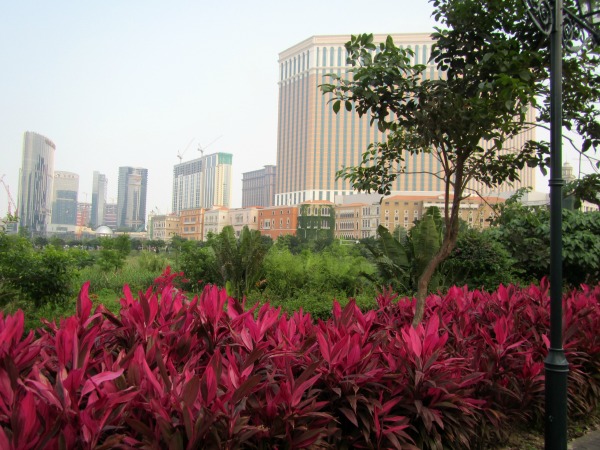 6. Stroll Along the Cotai Strip 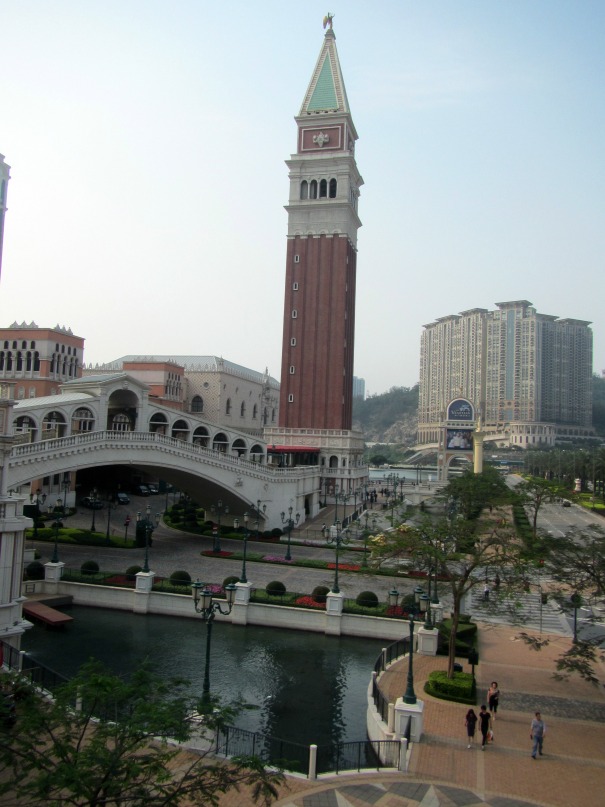 The Cotai Strip is very much “the Las Vegas of the East.” It has impressive things to see and do everywhere. The hotels themselves are amazing- the Venetian offers picturesque gondolas, a mini Eiffel Tower is being constructed by The Parisian. The shopping along the Cotai Strip is out of this world- Burberry, Gucci, Armani, Juicy Couture, Chanel, and so many more. Each hotel has its own casino. There are many fun family friendly attractions.  The Sheraton Macao Hotel (read my review here) will soon be opening up Planet J, the world’s largest indoor theme park! 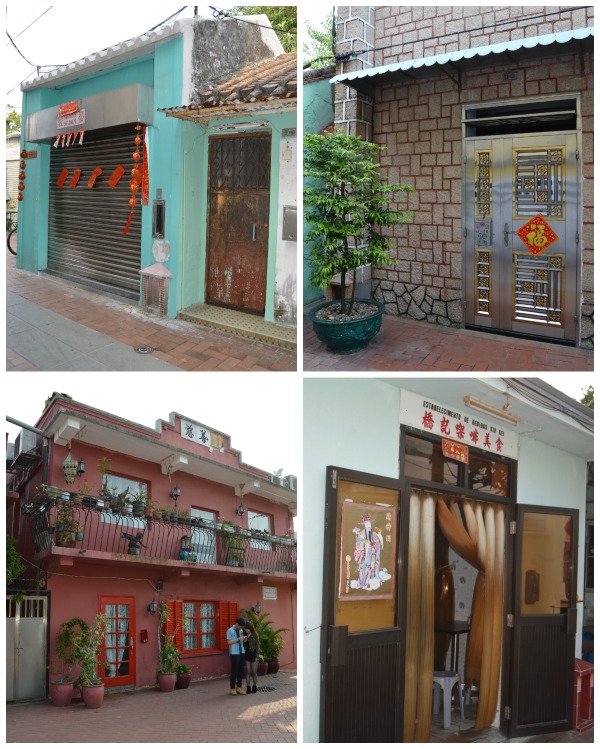 The southern part of Coloane is full of interesting sights.  We meandered along the streets with a great view of the South China Sea.  It was so interesting to get a peek into the Macanese life.  In fact, I took a whole slew of photos while we rambled here of all kinds of random sights that just said to me, “Wow, I’m in China!” 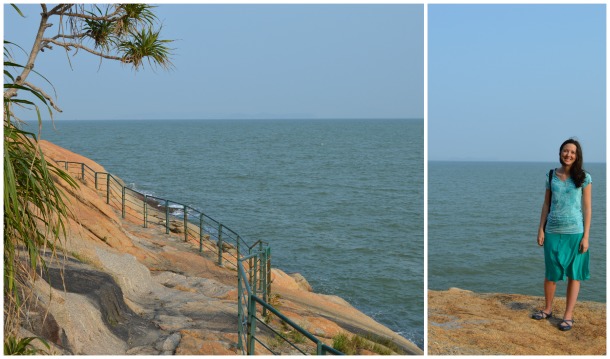 It was great to take in the fresh air and explore a completely different side of Macau.  The name of the hiking trail we took in Coloane is Hác Sá Long Chao Kok Family Trail and we took the “sea view path” overlooking the South China Sea. 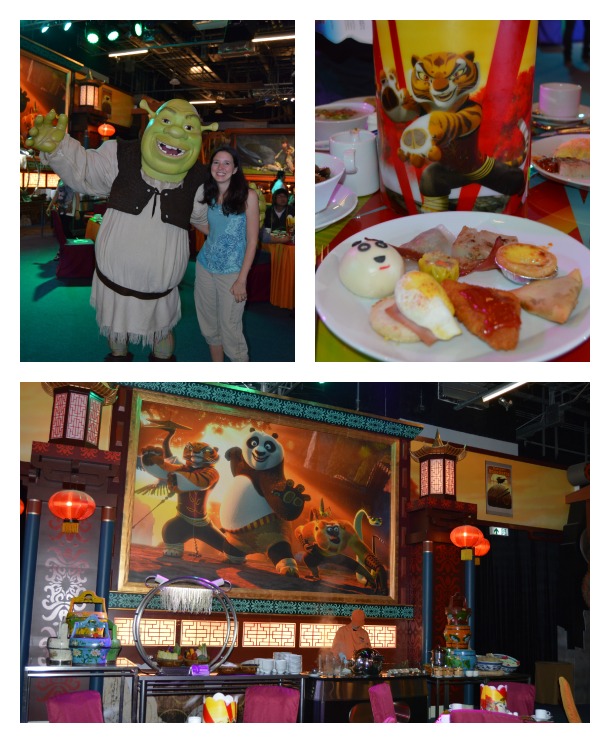 Shrekfast involves a huge buffet of Chinese breakfast and Western breakfast and cute DreamWorks themed treats like the Po, Kung Fun Panda, steamed buns filled with red bean paste. Though the food is terrific, people really go for the entertainment.  The DreamWorks characters come out on stage and do a dance number with the fabulous show hosts and then they come around to each table for photos.  It was a perfect way to spend the morning as a family but even as adult without kids, I had fun!  You can’t believe how Toothless moved just like the “real Toothless” from the movies.  I got a perma grin when I went to have my picture taken with Toothless and he nuzzled me! 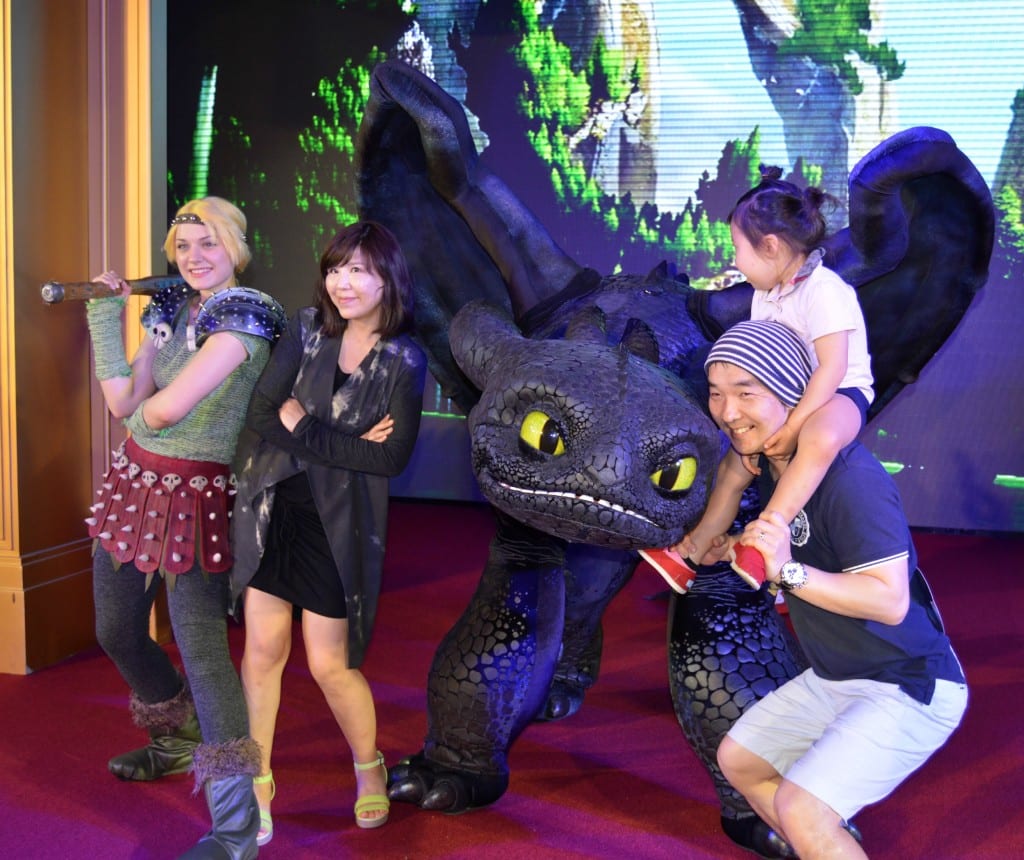 If you can’t make Shrekfast, you will still be amused by the DreamWorks Parade.  Though it doesn’t have as many characters or photo ops, it is still tons of fun!

Many of these things to do in Macau include fun things to do as a family.  I hope these ideas help you plan a fun trip to Macau.  Have you ever been to Macao or do you plan on going?  Which Macau attractions appeal to you the most?