You are here: Home / Parenting / Have Your Child Write A Letter For Apology
9shares

It’s usually the other way around but there’s an exception for every rule. You see, in my house, when I prompt my school-aged kids for an apology after they’ve done something they shouldn’t have, I usually get an insincere and sassy “SAR-REEE” in return. Not exactly what I had in mind. My second attempt is usually met with the same word, just a more whiny, softer tone. And then the power struggle ensues because they just pushed my don’t-just-say-it-if-you-don’t-mean-it button, at which point sorry is no longer good enough, and privileges start getting revoked. Is it too much to expect that, as the Mom and authority figure, I get respect in the form of a sincere apology?

Maybe not too much to expect, but probably not the best approach. It’s usually only in hindsight that I realize that it’s not about the words, it’s about the meaning behind the words. If they aren’t saying sorry like they mean it, they simply don’t mean it (no matter how sorry I want them to be). My solution? The apology letter. It works wonders. 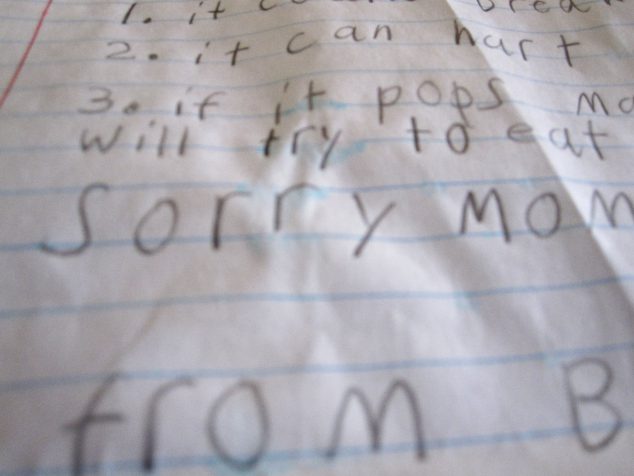 There are three purposes of having your child write a letter for apology.

1) To apologize specifically for what they did that was wrong.
2) To state simply why it was wrong (I make the older kids write several reasons).
3) To write what they will do differently next time.

You can even adapt it for the younger kids by making it fill in the blank or letting them draw pictures.

It takes thought. It takes intention. And it takes sincerity. These are the things we WANT them to have but can’t force feed them. I’m such a big fan of apology letters these days that my kids write them to their teachers when I get a report of misbehavior at school, to grandparents or other adults when I feel they are being disrespectful, and even to peers when the situation calls for it. And you know what? They’ve gotten some in return. Including some from me, which they cherish. Because sometimes words DO speak louder than actions.