Erika Wassall, the Jersey Farm Scribe here with an amazing casserole dish you won’t believe.  Why won’t you believe it you ask?  It’s too amazing to be this simple.  We’re talking restaurant quality flavor here folks.  This Chicken Florentine Casserole recipe is great for a simple family dinner or even to feed a crowd!

First of all, let’s start with the chicken.  Because here’s the kicker, this part doesn’t really matter.  You just need… chicken.  And really, it’s FAR from the star of the show, so how much and where you get it from doesn’t matter all that much.  I suggest using pulled chicken from my Roasted Chicken Legs recipe.  That’s what I did.

Now, put the chicken aside, because again, it’s not the star.  The star is the amazing combination of a quick homemade sauce, spinach and tomatoes.

Take a pan, throw a whole stick of butter in there.  Yes, the whole thing.  Or, you could do what I did, throw half a stick in, and then keep saying “well, just one more little bit” until the whole thing was gone.  This recipe will feed a lot of people, so it’s not really that bad.

Toss in a bit of milk.  And about 3/4 of a can of chicken broth.  See?  We lightened it up that way.  So now you can feel better, and go ahead with that entire stick of butter.

Let that all simmer together while you slice up a pint of cherry tomatoes.  You can use whatever kind of tomatoes you like, I had cherry on hand and it was great.  But no question, in mid summer when I have tomatoes from the garden, I would use whatever was fresh, and warm from the sun.

Now, get two packages of creamed spinach.  I used frozen but canned would work fine too.  If they’re frozen, pop them in the microwave just for a minute or two to soften them up and toss them in the pan.

Your amazing sauce is good to go now.  Taste it.  Now remind yourself that you can’t eat it all with a spoon because it’s for dinner.  (but again, it makes a lot so go ahead and nip a little here and there.

Boil the water for pasta.  Any pasta will work.  I actually would normally not have used spaghetti, but it was all I had.  And you know what… now I will use it again.  The long noodles were an amazing match up.  But don’t stress it.   Use whatever is in the cabinet.

When the noodles have about 3 minutes left, toss the chicken in the pan and stir it into the sauce… which is still simmering.  You don’t want the chicken to cook too much and get tough.  It’s already cooked remember, so you’re just warming it up.

Drain the pasta and then mix it all together in a big (seriously guys, it has to be pretty big) casserole dish.

Top with mozzarella cheese.  Yes, you can technically skip this.  It will still work.  But this step has two positives.

One… you can do everything up to this point, cover the casserole dish and wait until you’re ready to eat (a great plus if you have company over or a crazy evening schedule!).

Two… mozzarella cheese is great melted on top of just about anything.   And will give this chicken florentine casserole recipe an even more beautiful presentation on the table. 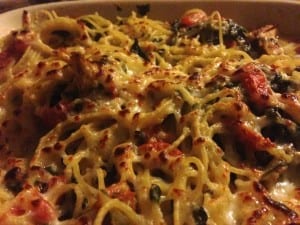 You don’t need much.  We’re not covering it so much that you can’t see the beauty beneath it.  Just a light sprinkle.  Then pop it under the broiler for 2-3 minutes and done!

This chicken florentine recipe is seriously amazing.  It looks like it came from a professional chef’s oven, it’s easy, could feed a small army (6 people, easy, maybe add some bread on the side) and it has an unbelievable flavor.

Try this chicken florentine casserole recipe any weeknight, because it’s simple and quick, or on a Sunday night for a crowd-pleasing family dinner.  I bet you’ll get asked to make it again! 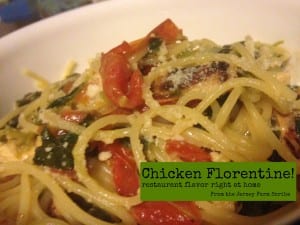 How To Make Chicken Florentine

Add chicken into the pan during the last 3 minutes of pasta cooking.

Drain pasta, and combine with chicken and sauce mixture.  Put in casserole dish.

Sprinkle with mozzarella cheese and put under broiler for 3-5 minutes.