The phrase, “simply delicious,” can be taken quite literally with these easy 3 Ingredient Recipes that can be whipped up in minutes. The short list of organic ingredients and fast prep time certainly don’t mean less taste and enjoyment, as you’ll find when you try them.

In many cases we haven’t been too specific regarding quantities of ingredients because these recipes are very easy to scale up and down depending on the number of people to be served. Whether you’re cooking for yourself or for a casual dinner party, these 3 Ingredient Recipes are a sure hit.

We fudged a tiny bit by not counting salt and pepper as ingredients. Chalk it up to a matter of taste. Also, some of the photographs show enhancements, if you don’t mind going over the three-ingredient limit yourself.

This dish is not only simple and tasty, but has a lot of eye-appeal – perfect for serving guests. 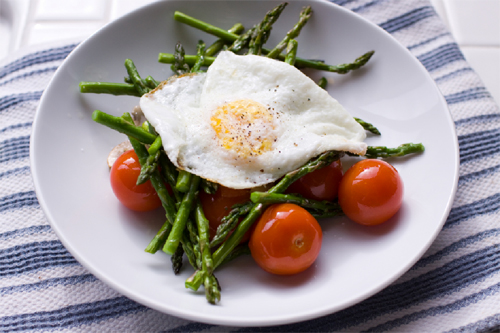 Basic Recipe: Boil, steam, microwave or grill spears of asparagus until just tender. Top with a poached or fried egg.

To avoid the tough stems that can be on even the thinnest asparagus spear, use this trick: Before cooking, take each spear in your fingers and gently bend the bottom half. The spear will snap off naturally at the section separating the tough root end from the tender stalk.

Asparagus can be boiled in salted water, steamed using a vegetable rack, microwaved or even grilled.

Organic produce is significantly yummier. Try going organic in this recipe—you’ll be glad you did.

The key to cooking asparagus is to avoid overcooking (it can turn mushy). Because asparagus spears can vary so widely in diameter (and so in proper cooking time), the best method is to sneak a bite after a few minutes’ cooking time. What you’re after is “cooked but crisp.” Remember that the vegetable will continue cooking for a few minutes after it’s removed from the heat, so adjust accordingly. (If you prefer chilled asparagus, take it from the heat and plunge it into an ice bath. Once cooled, remove the spears and dry on paper towels. Refrigerate until ready to serve.)

It takes about the same amount of time to cook both the asparagus and the eggs, so you can start cooking simultaneously.

If you can open a can and put a pot on the stove, you can have a delicious melding of seafood and creamy beans. 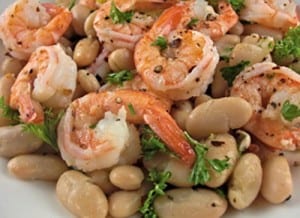 How To Make It: Open a can of Italian white kidney beans (cannellini) and heat in a saucepan. When hot, add a few raw, peeled shrimp, stir and cook until shrimp are just done (two or three minutes). Add two teaspoons of chopped herb, such as basil, and serve immediately.

Not all cannellini are the same and quality can vary widely. Be sure to check out Cooking Light’s taste test.

Shrimp cook quickly, and if overcooked, they can be tough. Luckily, they have a visual signal to alert you when they’re done: They turn pink.

Instead of basil, feel free to use Italian flat leaf parsley, thyme or marjoram.

A classic dish that food lovers have been enjoying for centuries. Great served with crusty bread to sop up the clam/wine broth. 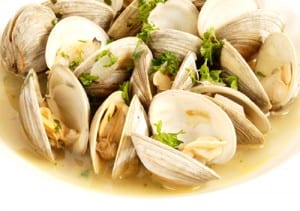 Recipe: Put washed clams in a pot with a cup of white wine, two cloves of chopped garlic and a tablespoon of chopped parsley. Bring to a boil and cook until clams open. (Discard any that don’t.)

You’ll definitely want the cooking liquid, but it can sometimes contain a bit of sand or grit. To avoid that, remove the clams from the cooking pot and carefully pour the remaining liquid into a heatproof bowl, leaving the sediment, if any, in the bottom of the pot.

There are a number of species of clams that work well in this recipe. If you live near the ocean, go with what’s local.

One of my favorite 3 Ingredient Recipes- garlic linguine. A match made in (an aroma filled) heaven! 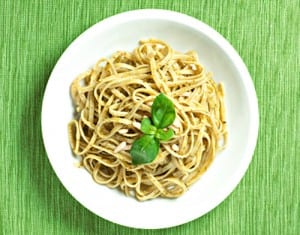 Directions: Bring a large pot of salted water to boil. Add one pound of linguine and start a timer. (Check the box for recommended cooking time; it’s usually around nine minutes.) While the pasta is cooking, put a large frying pan over medium-low heat. Add a cup of olive oil and four large cloves of finely chopped or thinly sliced garlic. Cook gently until the garlic turns the lightest brown (don’t overcook). Strain cooked pasta and add to the pan. Toss thoroughly and serve.

The most important part of this recipe is to avoid burning the garlic. Burned garlic is very bitter. Properly cooked garlic is mellow, rich and wonderfully earthy.

Lots of cooks will reserve a half cup or so of the pasta water before draining. This can be added to the dish, if necessary to adjust its consistency. 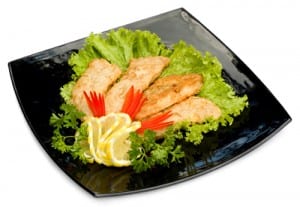 Simple Recipe: Thinly slice or pound thin (to about a half inch thickness) a chicken breast. Sprinkle with salt and pepper. In a frying pan, heat a tablespoon of olive oil over medium high heat. When the oil shimmers, add the chicken. Cook on one side until lightly browned and turn, browning the other side. When cooked through, put chicken on serving plate and sprinkle with fresh lemon juice.

To flatten a chicken breast, place it between two sheets of plastic wrap and pound it gently with a heavy object such as a rolling pin or the bottom of a saucepan.

Don’t even think about using that dreadful lemon juice from a bottle or plastic lemon.

For an even more intense lemon flavor, add thin slices of lemon to the pan with the chicken. Pour the cooked lemon slices and liquid from the pan over the chicken before serving.

Simple Recipe: Boil dried soba noodles according package instructions and drain. Serve with a dipping sauce of a half-cup light (lower sodium) soy sauce, to which is added a half teaspoon grated fresh ginger. 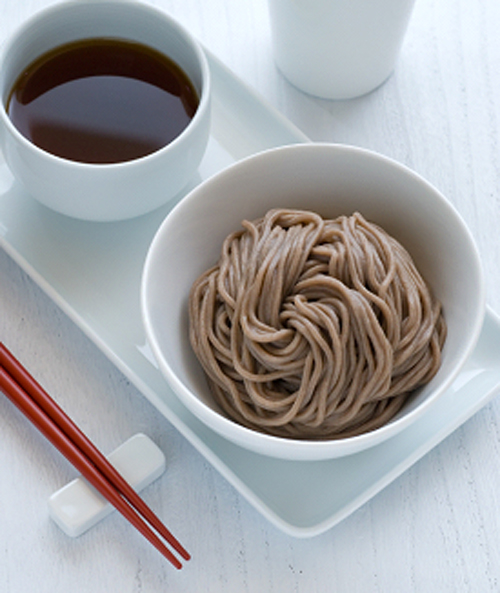 An easy way to peel ginger before grating is to use a teaspoon. Just hold the spoon firmly near its bowl and gently scrape the ginger root.

If you don’t have a traditional porcelain ginger grater, use a Microplane® or just finely mince it.

Easy Recipe: Add sausage to a 12-inch frying pan over medium heat. As sausage cooks, turn to develop even browning. About half way through the cooking process, add a cup of peeled apple, cut into half-inch cubes. Stir apples occasionally to coat with fat and cook evenly. When sausage is fully cooked, remove to a serving dish and pour apples over them. 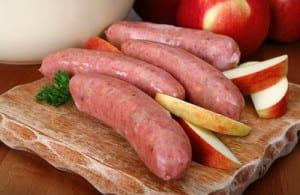 Try different sausages. While national brands are fine (yawn), much bolder (and better) types can often be found at your local butcher.

Same advice for choice of apples. Lots of organic varieties are available, if that’s your preference. Start with tart Granny Smiths or Honey Crisps, then experiment with Cortlands, Galas or always-reliable Golden Delicious.

How To: Heat a tablespoon of olive oil in a frying pan over medium heat. When oil starts to shimmer, add salmon fillet, skin side down. Cook for approximately five minutes and then carefully flip fillet over to cook the other side for another four minutes or so, depending on thickness.

About half way through the process of cooking the salmon, add 6 ounces of fresh baby spinach into a large frying pan over medium heat. Add one tablespoon water, salt and pepper to taste and cover tightly. Cook for approximately four minutes (spinach will wilt).

Put the cooked spinach on a serving dish and top with the salmon. 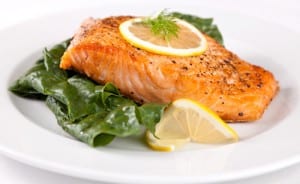 Don’t overcook the salmon – it’ll dry out. Lots of people follow the Canadian Method, which is basically 10 minutes per inch of thickness of the piece of fish, regardless of the cooking method.

Don’t succumb to the temptation to move the fillet around once it’s in the pan. Be patient. You want to develop a nice crisp outside crust to contrast with the tender interior.

It may appear at first that you’re overloading the pan with spinach. Don’t fret. Spinach wilts dramatically during cooking.

A pinch of fresh grated nutmeg adds a subtle and delightful accent to spinach (try it in mashed potatoes too).

As far as vegetarian 3 Ingredient Recipes go, this is my daughter’s favorite. She loves mushrooms. 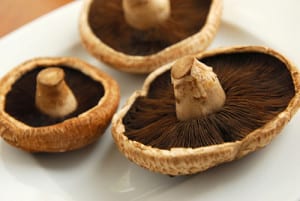 In place of shallots, consider sprinkling any fresh chopped herbs over the cooked portobellos.

All olive oil tastes the same if heated to cooking temperatures, so use the cheap stuff as a cooking medium. Save the pricey good stuff to use “raw” in salad dressings, or when drizzled over steak, pasta or, as here, portobellos.

10. Scrambled Eggs with… Just About Anything 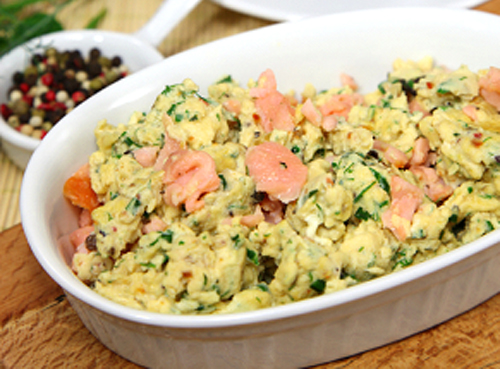 Basics: Melt a tablespoon of butter in a non-stick frying pan over medium heat. Crack two large eggs into a small bowl and add salt and pepper. Stir briefly with a fork or whisk. Add eggs to pan and stir constantly until eggs are just set.

The main issue with adding ingredients to scrambled eggs is determining the best time to add them. For example, if you’re adding chopped onions, peppers, tomatoes or the like, it’s a good idea to sauté them in the butter until they’re tender, before adding the eggs. The same goes for chopped meats, such as ham or sausage.

Soft cheeses such as crumbled feta are best reserved until the eggs are cooked thoroughly, so they remain separate, rather than incorporated into the mixture.