If you have been wondering where I have been for the last two days, the answer is with out electricity and internet. Nashville received torrential downpour and the the results are a record flood in Nashville as the Harpeth River overflowed! There are just way too many strange weather patterns going on. Anyone else notice this? Here are a few of my Nashville Flood pictures. 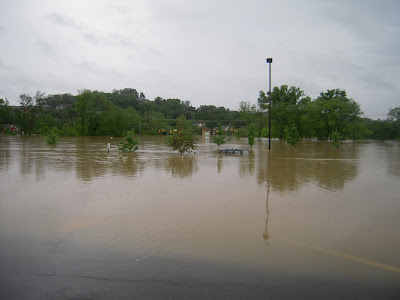 According to FOX News, “Tennessee Gov. Phil Bredesen called it an “unprecedented rain event,” but that failed to capture the magnitude. More than 13 inches of rain fell in Nashville over two days, nearly doubling the previous record of 6.68 inches that fell in the wake of Hurricane Fredrick in 1979…Five people have died in Nashville where on Sunday authorities found two people who drowned in a home and two others who died when their vehicle overturned in flood waters.”

Sunday morning our electricity and cable went out and it just came back on this morning (Tuesday morning.) On Sunday, we ventured out to our very nearby Publix to discover, that while it was still open, Highway 100 which runs by it was underwater as well as half the parking lot! The groceries at Publix were being emptied out by all that could make it there. 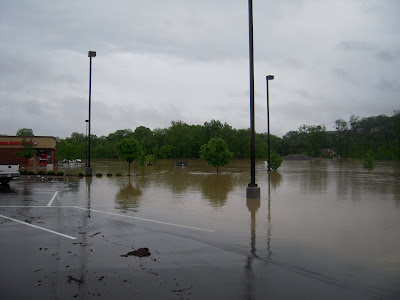 Observations From The Record Flood in Nashville

It felt very odd to be stranded and cut off as they closed the interstate for 70 miles and almost all of the roads out were blocked by flood water.

I had a glimpse into what life must have been like without electricity, computers, and TV. Though it was hard to overcome my withdrawal symptoms, checking the clock (electric), flipping the bathroom light switch, wanting to check my email, the list goes on, I also noticed something! There was so much life outside. Neighbors chitchatting in driveways, kids out and about, people taking walks. So many active people. Hmmm. It was kind of nice in some ways. But I am right back to the computer with over 500 emails to sort through!