I love Italian food. Maybe that is why I married an Italian! Anyway, when Speck Alto Adige challenged me to create a Speck recipe with their Italian lightly smoked and cured ham, I was up for the challenge! You are going to love this Speck Pizza Recipe. I did receive a cut of Speck to facilitate my recipe inspiration. I did not receive monetary compensation and the opinions expressed are my own. 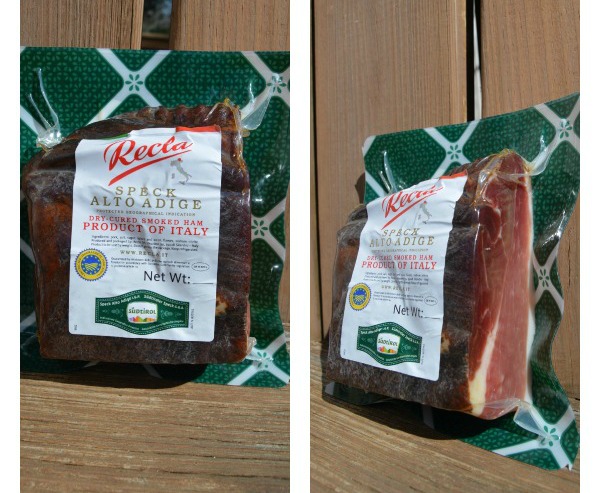 As I just shared Speck is lightly smoked and cured ham from Italy. But I wanted to know what speck is in the true sense of experiencing it. So first, I opened up my package of Speck and took a thin slice. I smelled it. Hmmm…smokey and peppery! I was a bit surprised because I expected it to more mild. I went ahead and tasted it. Yup, smokey and a little peppery. Delicious, lingering flavor delivered in a rich smooth meat. Quite delicious.

I did a little research to where these flavors were coming from and it turns out that Speck Alto Adige uses bay leaves, rosemary, juniper berries, salt and pepper in the curing process.  Now, what Speck recipe to make with it? I thought of Speck wrapped pears, yum. I thought of Speck and Swiss cheese croissants, yum. But I decided to go with Speck meat and arugula pizza because it is fancy and simple at the same time. I love recipes like this that are easy to execute but good enough to impress. 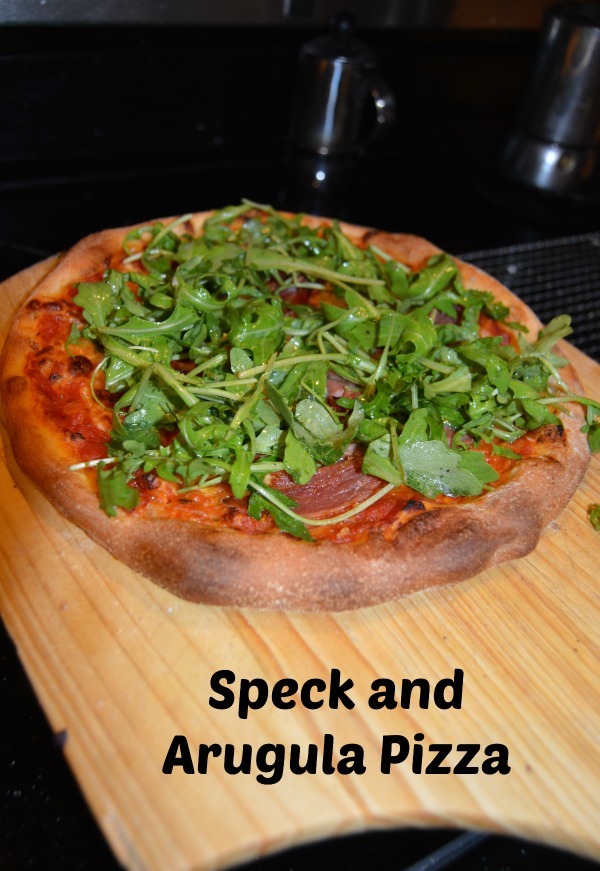 Pizza Dough (You can make your own as my husband does using the Lehmann Pizza Dough Calculator or you can go the lazy route, like I do, and buy fresh made pizza dough at Publix in the bread department.)
Pizza Stone
Pizza Paddle
Semolina Flour
Marinara (You can make your own, like my hubby, or get some of Emeril’s marinara like I do.)
Speck, thinly sliced
Mozzarella Cheese, grated
Arugula, washed and patted dry
2 tsp Extra Virgin Olive Oil
2 tsp White Wine Vinegar
1 clove of garlic, pressed

Insert your pizza stone in the oven on a middle shelf and preheat oven to 500 degrees. Make sure it is fully preheated before you put the pizza in.  This is essential to a nice crisp pizza dough instead of a soggy middle.

Use the semolina flour to sprinkle on the clean counter and roll out your pizza dough.  You can do small individual pizzas, or one large pizza.

Sprinkle a bit of semolina flour onto the pizza paddle and lay the rolled out pizza dough on top of the floured paddle to make it easy to transfer your pizza into the oven and onto the pizza stone.

Use a large spoon to deliver some marinara to the dough and smooth it around in circles until lightly covered with marinara. 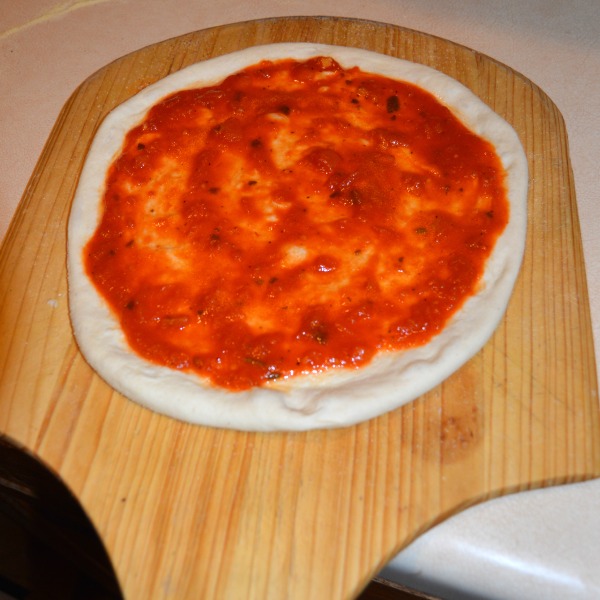 Sprinkle with grated mozzarella cheese until the marina is lightly covered. 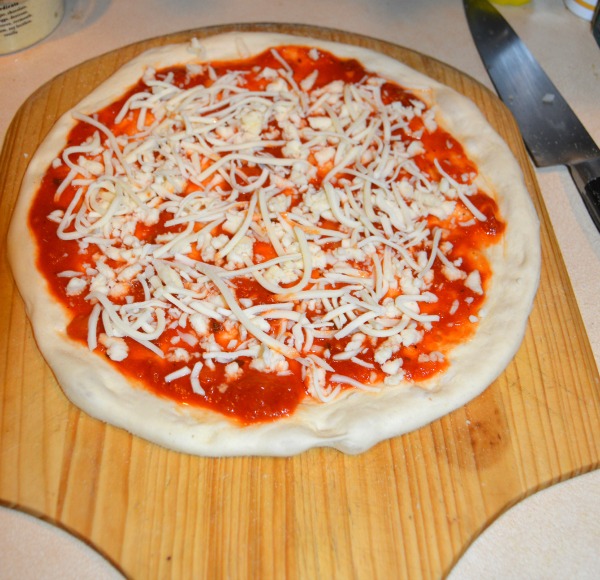 Push the pizza off onto the pizza stone and allow to bake for about 6 minutes.

Pull the pizza back out and lay thin slices of Speck on pizza then reinsert into the oven. 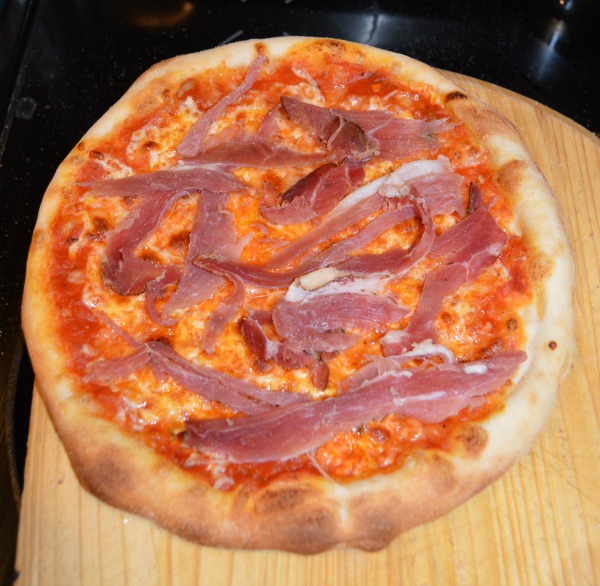 Cook about 3-4 more minutes or until cheese is melted and crust has browned. Remove from oven. You could stop right there and enjoy a delicious Speck pizza but I love the peppery flavor of arugula and it is great with the saltiness from the cooked Speck. So I would proceed to add arugula which is also a healthy addition!

Mix the olive oil and vinegar and pressed garlic in a bowl and add a few hand fulls of fresh arugula. Mix them around to coat evenly and then arrange some arugula leaves evenly over the pizza. 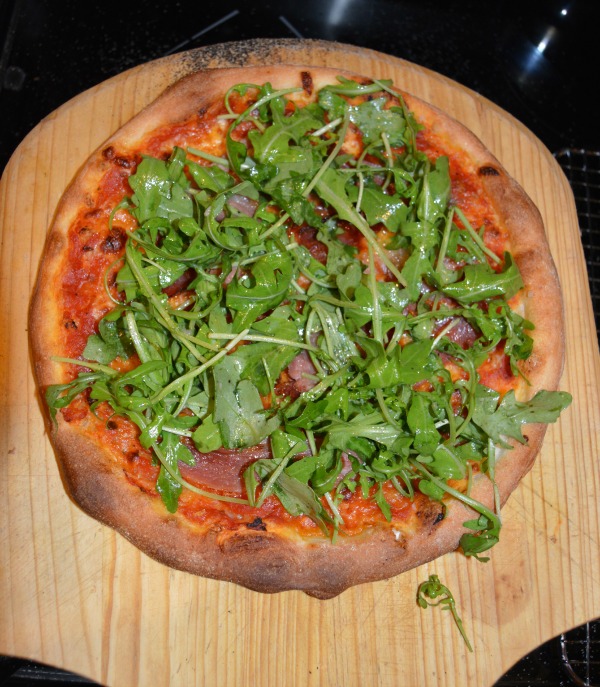 Then slice and serve!  Delicious or as my husband would say, “Delizioso!” I loved the saltiness of the Speck and the rich meat flavor balanced by the light acidic arugula. Yum!