You are here: Home / Parenting / How To Help Kids Develop Good Self-Esteem
79shares

Self-esteem is very important to cultivate in kids. Having self-esteem not only helps in sports, but also in school, personal relationships and eventually in the workplace.

Some people equate self-esteem with confidence, but that’s only part of the equation. While good self-esteem in kids comes from being confident in their abilities, there are other factors – such as awareness, respect for others and a drive to succeed. 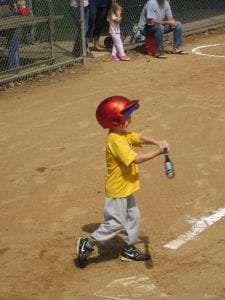 Is there a child in your kid’s class or team who doesn’t perform as well as they do? They have to work harder to learn things or simply don’t have a natural talent at doing those things your child does really well.

We need to teach our children that instead of putting them down or going out of their way to avoid them, one of the best things they can do is offer to help them.

If the child is having trouble with a certain routine or drill, have your child offer to help by going over the drills with them so they get better.

By helping their team members, they’ll not only be building their own confidence, but their own self esteem will skyrocket from having improved someone else’s abilities.

Likewise, if your child is struggling with something, encourage them to ask their coach or friends for help. Being able to go to another adult is a very important life skill to acquire.

Help your child get out of their comfort zone

I once knew a kid who was great at playing the goalie on his soccer team. Nothing got past him. His teammates loved him, because knew that they could focus on their own positions and he made them look good. He was full of confidence and self esteem that carried over into every aspect of his life.

The goalie, in is new position, was showing signs of doubt and felt intimidated because of how much of the field he had to cover in his new position. As the practice game went on, one goal after another was scored, while the all-star goalie stood in the middle of the field, too intimidated by his own mind to move around.

When the coach blew the whistle for a ten minute break, something totally surprising happened – instead of the usual name calling that would come with missed goals and bad plays, the goalie and the center midfielder got together to trade information and pointers on how to play their new positions better.

When practice resumed, fewer goals were scored and the goalie was now zipping around with much more confidence in his new midfield position.

It turned out to be a great way for the kids to gain self-esteem doing something out of the ordinary and not being afraid to go to others for help.

In future practices, those two kids would switch position on their own, and told me it helped to give them confidence in learning new skills, as well as giving them a new perspective they used when playing their regular positions.

You get what you give

You can tell your children they are the best at something, but going out there and doing something out of their comfort zone, stretches them and helps them believe they can accomplish anything.

If they learn how to give other people respect, show a willingness to learn and give help they realize there will be no obstacle that can stop them for long.

Guest post by Wendy Lynne, the Director of Mental Toughness Academy.  The Academy’s online Mental Toughness Training helps kids build confidence, focus, determination and the ability to bounce back from adversity – what they call Mental Toughness.   The training makes a unique gift for kids that will change their lives! @teenmentaltough @youthconfidence