My mom is a real health nut, the kind that I aspire to be some day! She is always whipping up some delicious vegan, raw food recipe. I am always marveling at how good it tastes and while still being pretty darn healthy! When I received permission to share a raw vegan recipe with you from the new cookbook- SWEETLY RAW DESSERTS [Quarry Books, December 2014] by Heather Pace– I was super excited. The cook book (available at Amazon on other book retailers) shares everything you need to know about making the most delicious and nutritious raw food desserts and I am able to reprint the Lemon-Ginger Blackberry Pie recipe here for you! 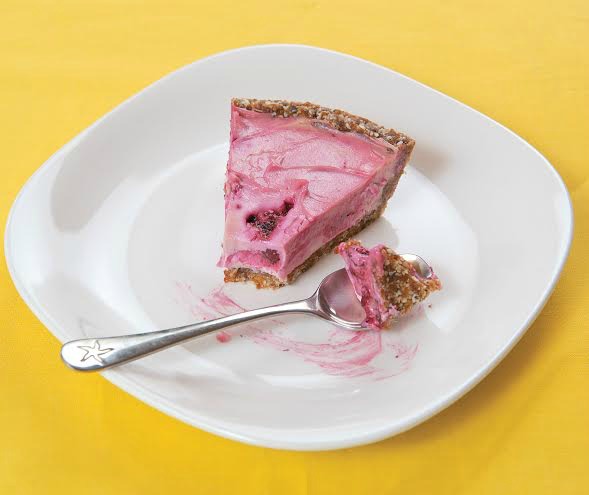 Grind the almonds and coconut into flour in a food processor.

Add the apricots and dates and process until they are completely broken down. This may take a little while if the apricots are firm.

Add the water and pulse to combine.

Blend the lemon juice, cashews, nectar, and ginger in a high-speed blender until smooth.

Add the zest and coconut oil. Blend again to incorporate.

Transfer the mixture to a bowl and fold in the blackberries. If using frozen berries, fold them in quickly so they don’t clump together and start firming up the filling before you have a chance to spread it.

Do not overmix if you want a colorful swirl in the filling.

Evenly spread the filling into the crust.

Chill in the freezer for 6 hours and then in the fridge for at least 8 hours.

Do you think you will try this healthier dessert option?  Is it the raw vegan foods aspect that attracts you are the rich flavor combinations of lemon, ginger, and blackberries?