Erika Wassall, the Jersey Farm Scribe here, with an oh so wonderful and easy chicken broth recipe- perfect to warm you and nurse you back to health this time of year.  These instructions for how to make chicken broth are simple to follow and they turn chicken bones into a rich, delicious broth.  This versatile homemade chicken broth with know your socks off it is so good!

What Is Chicken Bone Broth Soup?

First I want to say that it seems to me we always just called it chicken broth, sure we made it with bones but we didn’t really say chicken bone broth soup. Well, lately it has become fashionable and trendy to point out that it is made out that it is bone broth. This is because so many people are beginning to recognize the health benefits of all of the collagen in the bones. Keto diet lovers are especially savvy on the benefits of bone broth.

According to Bon Appetit, the difference is that chicken bone broth “is more viscous due to the collagen that seeps out of joints and bones during long-term cooking, and broth, which is thinner and is made with more actual meat.”

Why This Chicken Bone Broth Is Amazing

Chicken broth that you buy at the store does not compare to this homemade chicken bone broth. At all. And you really can’t mess this up. Throw stuff in a pot, let it simmer, drain it. Done.

What To Use Chicken Bone Broth For

This is a rich, thick broth. It’s great for EVERYTHING. Soups. Sauces. Stew. Risotto. The key to ANY sauce tasting amazing is the broth, so keep a bag of this in the freezer.

Pour the warm broth into an ice cube tray, and then dump them in a bag when they’re frozen. You’ll have little ice cube sized amounts of chicken broth (about two tablespoons each) for adding to any recipe.  Or measure out one cup servings and freeze in individual Ziploc bags to be recipe ready.

The real trick to any great chicken broth is planning ahead.  But wait!! Don’t roll your eyes yet. It’s the easy type of planning ahead. Instead of throwing things away, just throw them in the freezer!

I have two freezer bags of stuff at all times in the freezer, one for bones, one for veggie remnants.  If you cook a chicken, toss the carcass in a bag in the freezer. If you cook chicken legs, or wings, toss the bones and skin in the bag too. Cooking with garlic or onions? Throw the papery outside parts into the veggie bag. Carrots starting to get wilty? Toss them in there. End of the celery stalks? In the freezer they go!

I’m a big fan of never buying anything for the purpose of making chicken broth but rather just using my scraps. I just wait until I have two full bags. Then I make my homemade chicken bone broth recipe.

Here is what I put in one large stockpot of broth:

Four carrots (they were going soft, so I threw them in the freezer bag about 3 weeks ago)

Fresh herbs (optional, but try a sprig of rosemary, thyme, or oregano)

These amounts are largely irrelevant, but if you need a jumping point, that’s a good place to picture yourself starting. YOU CANNOT PUT TOO MUCH IN. The basic idea here is simple…. Two chickens, garlic and a bunch of veggies. It’ll blow you away no matter what you do at that point.

And there is NO need to chop anything, unless it is really big. You’re going to cook it all day long, so all of the flavors come together on their own anyway. Then you are going to strain it.

How To Make Chicken Bone Broth

STEP ONE: Toss all the ingredients in a big 8 qt. stockpot.

STEP TWO: Fill the rest of the stockpot with water leaving a couple inches open so you don’t spill or boil over. How much you ask? Whatever fills the pot. No seriously… don’t stress it. Just dump some water in there.

STEP FOUR: Let it simmer (just a mild simmer, I usually keep it on low) ALL DAY LONG. Or at least 4 hours.

Yeah… that’s basically it. I told you it was a super easy chicken broth recipe!

Once it has simmered all day long… making your house smell amazing by the way, add about 1 to 1 ¼ teaspoons of salt and a ½ teaspoon of pepper. Then taste it. Add more salt and pepper to your taste. You can always add a pinch of dried or fresh oregano, rosemary, parsley, thyme, or sage, but it’s great without those too.

Pour it into a glass container, cover with plastic wrap and let it cool off in the refrigerator. I usually let it sit overnight, because this makes it easier to separate.

By the next morning, the fat will have risen to the top. You’ll see a darker, thick coating on top. Just spoon that fat off and throw it away. Underneath will be your chicken bone broth which when refrigerated has turned thick like jello.

Do not be surprised when your broth is more of a gelatinous conglomeration than a liquid broth. That’s part of what makes it so amazing. It’s thick and rich! One of best tricks I ever learned to making what are already great recipes taste even more AMAZING is using this rich, homemade chicken bone broth. When warmed, it melts into a normal liquid state.

Spoon the cooled broth into a freezer bag, and store it in the freezer (or fridge if you’re going to use it within in a few days to a week). If you want smaller portions for cooking with, spoon it into an ice cube tray, and then dump them into a freezer bag 24 hours later.

I love this recipe because it allows for so much variation. I made a LOT of roasted garlic one week and ended up making a broth that weekend with two chickens and a TON of leftover garlic and very few other vegetables. It was great!

How To Make Chicken Bone Broth 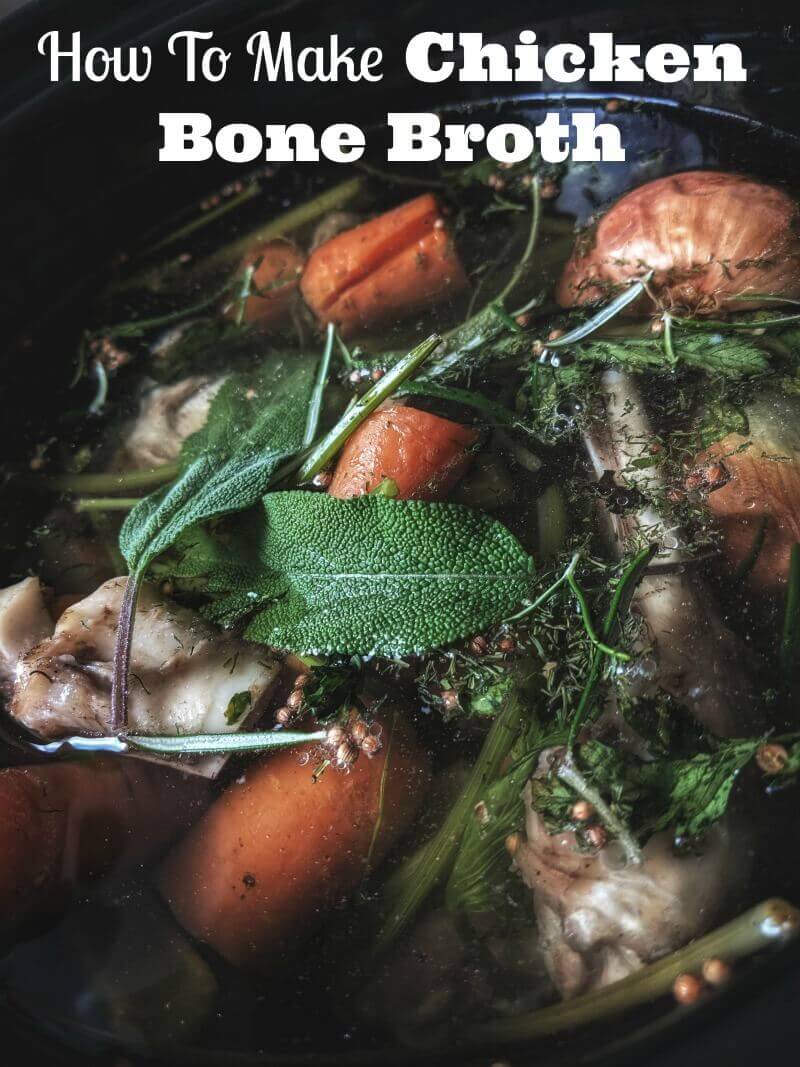 Do you ever make your own chicken broth? Let me know if you try it or any variations that you like. Look me up on Twitter at @NJFarmScribe and let me know how it goes!

Affiliate Link To My Book On Amazon

© Scarlet Paolicchi and Family Focus Blog, 2010-2023. Short excerpts of this family blog may be used, provided that full and clear credit is given to Family Focus Blog with link back to the original content. Duplicating a whole post is strictly prohibited.