You are here: Home / Family Food / How to Freeze Soup And Recipe For Bean Soup With Ham Bone
185shares

My friend Angela Roberts has an amazing food blog called Spinach Tiger.  You have to go check it out because it has so many awesome recipes with beautiful photos that will make you drool.  She has a knack for taking recipes that can be intimidating and making them very doable.  I am so excited because she agreed to create recipe to share with just my lucky readers. Yay!  I love her food and I am sure you will too.  Today, she is going to share some fabulous tips with us on how to freeze soup and her very own recipe for Bean Soup with Ham Bone.  Can you freeze bean soup?  Yes, just follow these simple steps on how to freeze bean soup and you will have some on hand for any occasion.

This bean soup is that perfect hearty, winter soup that will serve as a whole meal. It’s made with the left over ham bone, and a bag of beans with 13 varieties. You can use one type of bean if you prefer, such as a navy or great northern bean. The ham bone was left over from Christmas dinner and put into the refrigerator. It was a rather large bone still containing a good amount of ham, which was used to cut up and put back into the soup. If you don’t have these kinds of beans or a ham bone, I’ve put substitutions in the recipe. 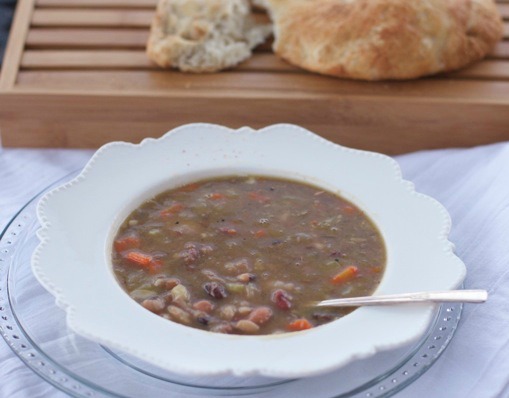 The most important part of making a good bean soup is to use good quality dried beans, and to soak those beans overnight. Once they are soaked and rinsed, I cook them with a little garlic, and half onion, simmering for up to two hours until the beans are tender. This technique makes the beans more gentler to eat, easier to digest. Make sure not to add any salt until the beans are cooked.

The soup making process begins with placing that big ham bone into a large pot or slow cooker with carrots, celery, onion and some fresh herbs. A little parsley, thyme and rosemary (or any combination) adds a nice layer of flavor. The ham bone will create its own broth. Some people will add in chicken broth and you can do that, but I found it not necessary. I added the drained cooked beans, salt and pepper and cooked on low for 6 hours. You could cook on low on top of the stove for about two hours. I found the long slow cooking created a very creamy soup. If you’re soup isn’t creamy enough, you can remove some of the beans and blend them and put them back in the soup.

Can I Freeze Bean Soup?

I always make an extra large pot so I can freeze some for a cold, or snowy day. Freezing bean soup is so smart in the wintertime and bean soup freezes really well. Here are some tips for how to freeze soup and they work great for freezing bean soup with hame bone as well.

How To Freeze Soup 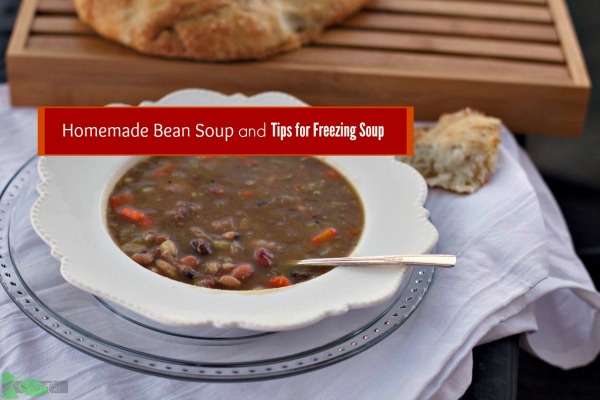 I hope you find these tips for how to freeze soup useful! 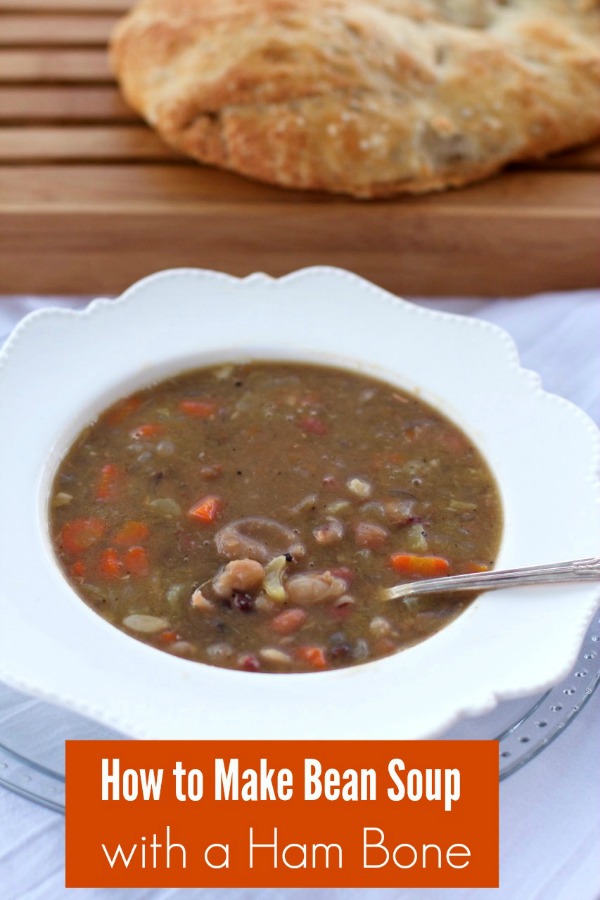 I used a bag of beans with 13 varieties for this soup. You can use one type of bean if you prefer, such as a navy beans or great northern beans. My recipe calls for cooked beans. You could used cooked beans from a can or here are instructions for cooking your own beans which is my preferred method.

1 pound of beans (I used a bag of beans containing 13 varieties) You can use one variety. Navy, great Northerns or baby limas are recommended)

4 garlic cloves (wrapped in cheesecloth to be removed later)

How to Cook Dried Beans

Soak the beans overnight or at least six hours with cold water, 3 inches past the beans.

Discard the beans that rise to the top and rinse.

Cover with one inch of water and bring to a boil in a pot with a lid. Once boiling, reduce to a low simmer for up to 90 minutes, or until tender.

This bean soup is that perfect hearty, winter soup that will serve as a whole meal.

Soup is best served  hot, but often I will add ice cubes to the kids’ bowls. Grated parmesan cheese is a great addition for perking up a soup, as is croutons, crackers, or crusty bread. I hope you enjoy this bean soup and ham bone recipe and the tips on how to freeze soup.