Recently, Home & Family featured a segment with Chef Chris Oh sharing his amazing Korean barbecue recipe.  You may be familiar with Chef Chris Oh as a judge and chef on the new Bravo show “Recipe for Deception”.  Chris Oh is also founder of Seoul Sausage Co, Co-founder of Hanjip Korean BBQ Restaurant, managing partner of Escala, the co-owner of Nomad Kitchen, the winner of multiple TV competition shows!  Chef Chris Oh is known for his delicious Korean barbecue recipes and he shared his Korean BBQ sauce recipe on the Home & Family Show, which airs weekdays at 10 am ET on Hallmark Channel.  I was given permission to share it with you here.

To Prepare This Korean Barbecue Recipe, you will also need:

Korean food, like most Asian cuisine, is full of umami flavors. If you like to spice things up even more, sprinkle some red pepper flakes on top. This easy Korean bbq sauce is such a versatile sauce. You will love it!

1) Whisk the Korean BBQ sauce ingredients together until fully mixed.
2) Place in a glass pyrex or large ziplock and add the thinly sliced beef.
3) Marinate in the fridge for at least 1 hour.
4) Remove and discard marinade.
5) Pat dry and sear quickly on each side on a very hot grill pan, cast iron pan, or bbq grill.
6) Serve the Korean Barbecue beef over rice with pickled veggies, garnish with sliced green onions and sesame seeds. 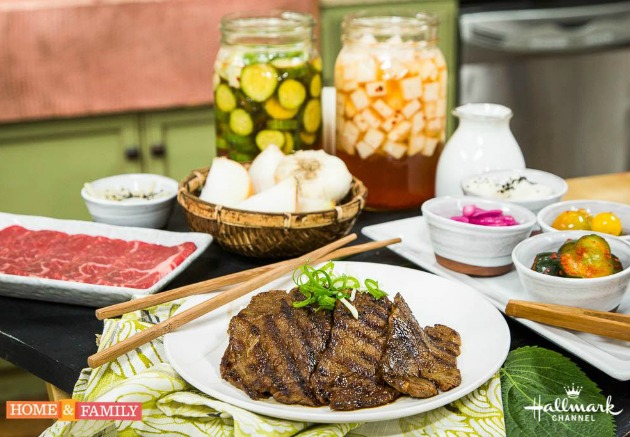