Pepperoni cheese bread?  Yes, please!  I have a recipe I make for a giant roll of it.  It’s a great party food for a group, filling, comforting, and yummy.  But it’s a process and it makes a TON.  So here is a quick alternative for a quick-fix of pepperoni, cheesey, deliciousness.

You can make as much or as little as you want.  And it’s less than a half hour from the time you thought of it, until it’s cooling on your plate, ready to be devoured.

Grab one of those amazingly versatile crescent roll tubes, some cheese, and pepperoni.

Unroll the crescents, lay the pepperoni in there, sprinkle with cheese, top with seasonings and the extra cheese that’s likely all over the pan and roll up! 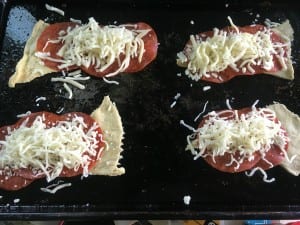 Basically, it’s as simple as that!

–  fill and roll from the THIN end, (the opposite way you normally would roll them).  Leave a small part of the widest end uncovered with cheese so you can stretch and wrap it around to seal closed.  This way, the widest part is the last part and you can wrap it around the edges to keep in as much of the cheese as possible.

– press the cheese down before you roll up (space saver!)

– technically a reasonable tip would be to not overfill… but I tend to struggle with that one.  If some cheese spills out, I’m totally fine with that anyway!!!

– BAKE WITH seams up.  It may not look as pretty going in the oven.  But it’ll hold the cheese in better.

– I prepare these entirely on the cookie sheet.  (less cleaning!)  I always end up with shredded cheese all over the pan.  I scoop it up and stick it back on top

There are TONS of variations on this quick pepperoni cheese roll up recipe.  You could add spinach, different cheeses, sausage instead of pepperoni.  Throw some Italian seasonings in there.  Serve with a marinara sauce.  Use chicken and blue cheese and serve with a buffalo sauce.  (umm… wow, that sounds pretty good!) 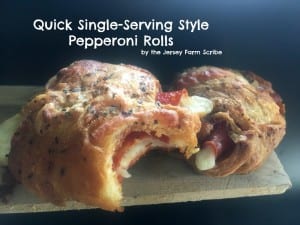 Unroll the crescent roll ups and lay on a prepared cookie sheet.

Lay 2-3 (or 4, depending on size) pieces of pepperoni at the thin tail end.

Roll FROM thin end to wide end and then wrap the thick edges around the opening as much as possible.

Top with basil or Italian seasonings

(if not using the whole tube of crescent dough, simply store the rest in a plastic bag,  I’ve done this plenty of times and stored it as long as a week!)

This quick pepperoni cheese roll up recipe is a great championship game or super bowl snack.  Or it’s so simple and scalable that it’s the ultimate a special treat at any old time.  Got any ideas of what you’ll throw in there, how you’ll make this recipe personal to your own tastes?  I’d love to hear them in the comments!