Erika Wassall, the Jersey Farm Scribe here, with a recipe for how to make French Toast Sticks.  Seriously, knowing that homemade French toast sticks exist in the universe just makes it a better place.  They are so good!  What’s more? You can make extra and keep them frozen so you can have your cinnamon French toast sticks any time! 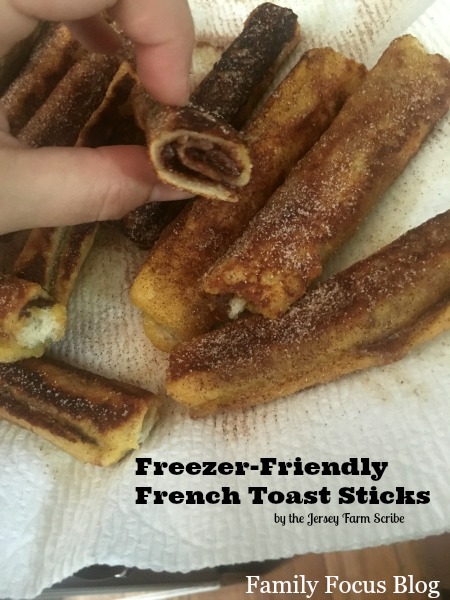 So here I am, pregnant with my first child, (yay), and I’m ALL about trying to make things as simple as possible once the Little Minion comes into the world.  I’ve talked to other moms, and many, many moms suggest having as much frozen food as possible.  And even more specifically, easy grab food.  Casseroles are great, but (A) that’s often what people bring over for new moms and (B) sometimes there really isn’t time to heat a whole casserole and sit and eat.

So I’ve been on the look out for food I can freeze, individually, and then pop in a microwave and devour.

These frozen french toast sticks fit the bill perfectly for that sweet tooth.

The ingredient list is simple.  The homemade french toast sticks are versatile (you know how much I LOVE versatility!), quick to make, AMAZING fresh, and JUST as good frozen and properly reheated.

Let’s get to how to make french toast sticks!

Grab a loaf of bread.  Soft bread.  I used Italian.  (Potato bread would be delish as well!)  Cut off the edges, and squish it!  Sure, you COULD use a rolling pin.  If yours is on hand, grab it!  But if you’re like me and couldn’t find yours, just use your fingers and squish it down.

Melt butter in a small bowl in the microwave.  Then mix in white and brown sugar and cinnamon.

Get another bowl, a shallow one for dipping.  Mix up some egg, milk, and a touch of maple syrup.

This is what your prep station will look like. 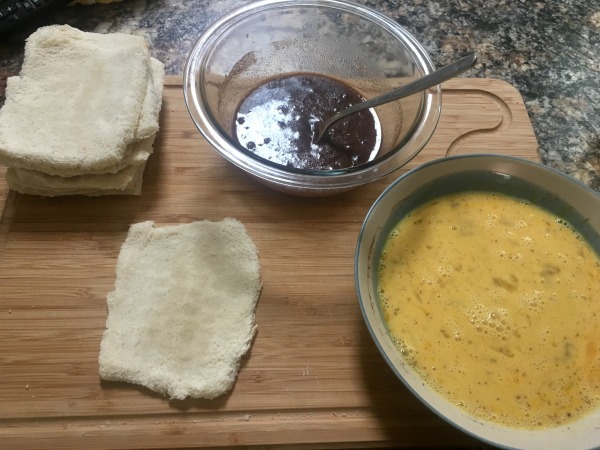 Scoop out some sugar/butter/cinnamon mix and spread on the bread.  (a fork is the best way to spread). 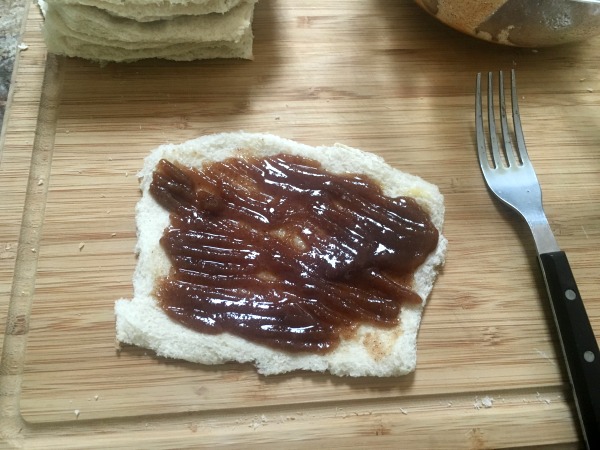 Roll it up the stuffed french toast. 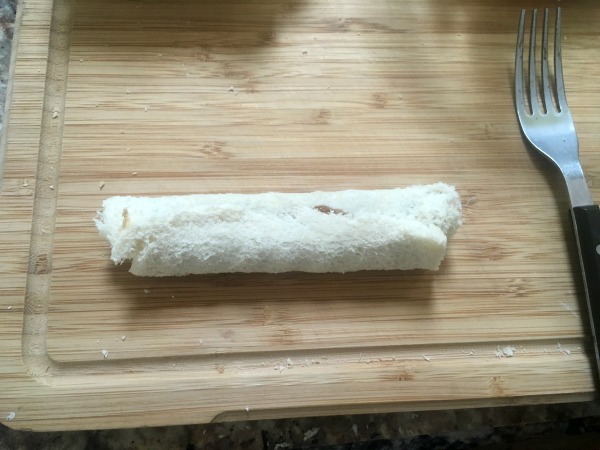 Then dip and roll through the egg mixture. 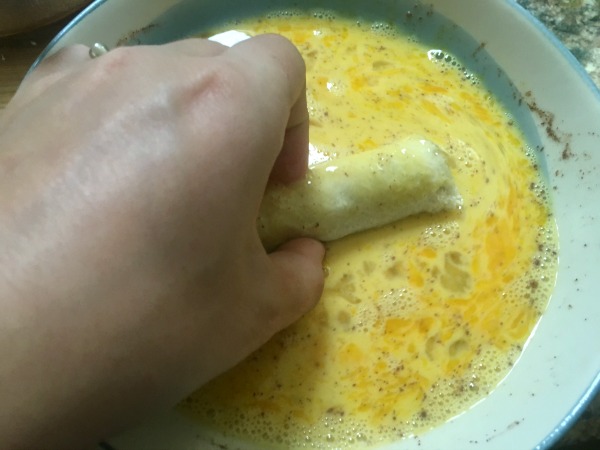 You can make up a few, and then pop them into a skillet with some butter.  Brown ALL sides.  When I say ALL, I mean it might be more than two.  Some of mine ended up having three sides.  The more you can brown, the better really, and it’s only a minute or two a side, so brown it up! 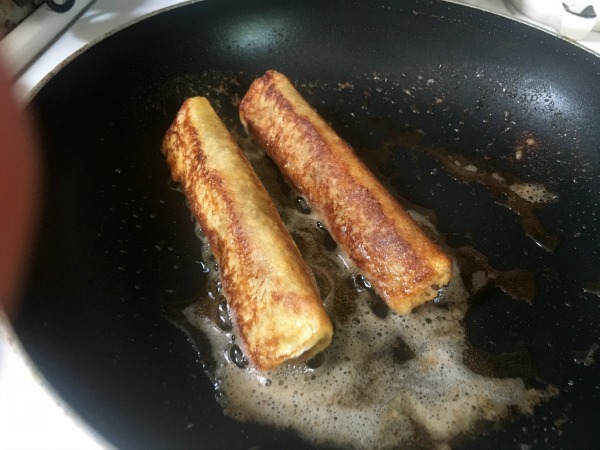 Take the homemade french toast sticks out and place them on a paper towel.

These homemade french toast sticks actually have a bit of a crepe texture because the bread was flattened.  They hold the filling well and are a fun finger food.

You may need to play with the heat/butter on the skillet.  Burnt butter will leave a funny taste.  What I ended up doing is wiping the butter out after each batch, and starting with new.  This didn’t take as long as it sounds.  You only need a small amount of butter in the pan for each batch anyway, just to coat the pan.

If you find yourself running out of filling, just mix up a bit more (or add Nutella in there to stretch it in the end, that’s what I did!)

TO FREEZE:  Place on a piece of aluminum foil, in ONE layer, and place in freezer for two hours.  Then you can stick them all in one freezer bag and they won’t stick together.  They’ll keep for months.

TO REHEAT:  Here’s the thing, these homemade french toast sticks can taste JUST as good reheated.  No joke.  Take a paper towel, wet and ring it out entirely, but it’s still damp.  Take out however many you need, wrap maybe 3 max per paper towel and pop in microwave for 20 seconds.  Check.  You’re looking for them to be unfrozen throughout.  This will depend on how many you’re doing.  Keep going for 10-20 second intervals until they’re thawed.  (Listening helps, if you hear the sizzle, they’re ready) 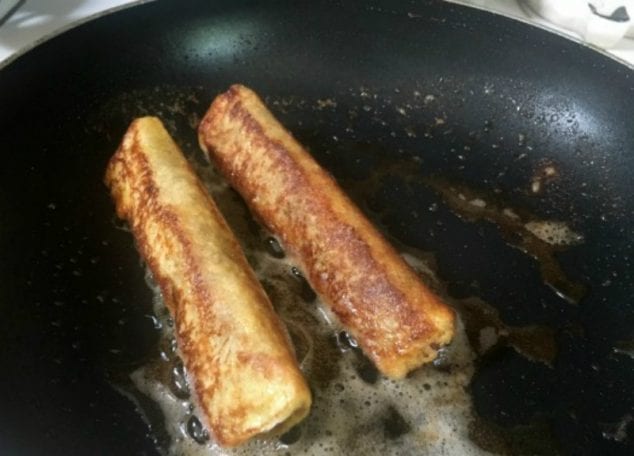 THEN, pop then on the stove in a half a TBS of butter, and brown your sides again, just quickly.

If you follow those directions for how to make french toast sticks and freeze them, they will taste JUST as good reheated.  AMAZING.

DISCLAIMER:  These are BARELY a breakfast food.  They’re more of a snack/dessert.  But you could make them healthier with a lighter filling.

More ideas for the filling of these stuffed french toast sticks:

TO FREEZE:  After they’re cool, place on a piece of aluminum foil, in ONE layer, and place in freezer for two hours.  Then you can stick them all in one freezer bag and they won’t stick together.  They’ll keep for months.

TO REHEAT:  Wet and wring out a paper towel and wrap up to maybe three in each paper towel.  Pop in microwave for 20 second intervals until hot.  Then toss them all in a skillet with a TBS of butter.

What unique ideas do you have for the filling?  Let me know in the comments, I love to hear from you.  If you make French toast sticks, tag @familyfocusblog and @NJFarmScribe so we can see how they came out!